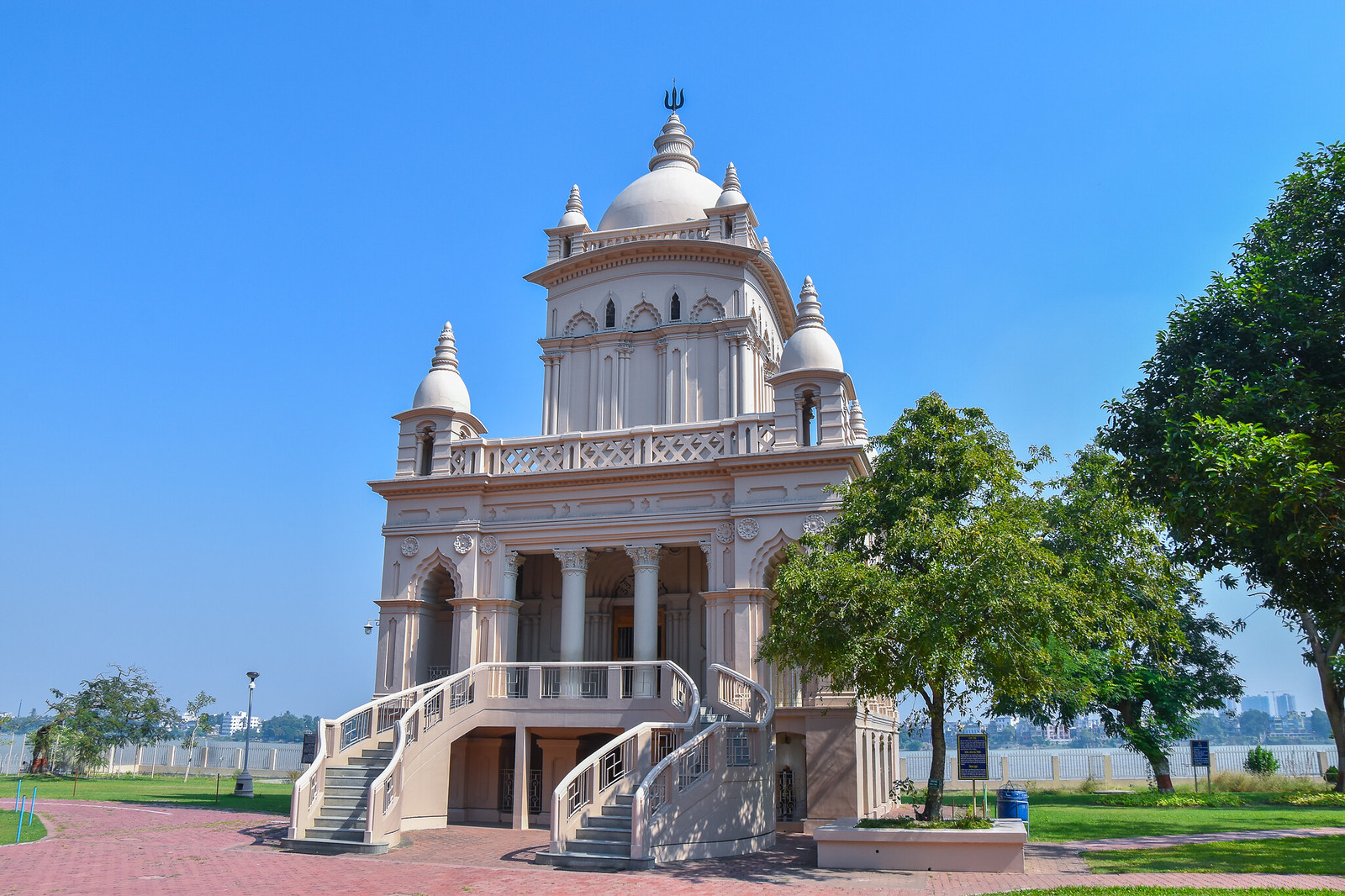 This temple stands on the spot where Swamiji’s mortal remains were consigned to flames. The place was chosen by Swamiji himself. His Life records: ‘Three days before his passing away, as the Swami was walking up and down on the spacious lawn of the monastery in the afternoon with Swami Premananda, he pointed to a particular spot on the bank of the Ganga, and said to his brother-monk gravely, “When I give up the body, cremate it there!” (He passed away on 4 July 1902.) On that very spot stands today a temple in his honour.’

Strangely, the completion of Swamiji’s temple took a long time, almost twenty-one years, for want of funds despite earnest appeals sent not only within India but also abroad. The construction work could begin only in January 1907, almost five years after Swamiji’s passing away. But the progress was very slow. However, in January 1909, even when the temple construction remained incomplete, a large portrait of Swamiji was placed and beautifully decorated inside the temple on Swamiji’s birthday.

In January 1912, when it was found that the construction work had not progressed much, Swami Brahmananda wrote in Mahratta in an admonishing and painful tone: ‘Swamiji left his body ten years ago. It is needless to say that his death is a loss to the whole nation. People have expressed their grief and concern regarding that. But could we make a befitting memorial yet to this patriotic saint of modern India? This is a matter of shame and a standing testimony of the worthlessness of Indians.’ But his reprimand fell on deaf ears. 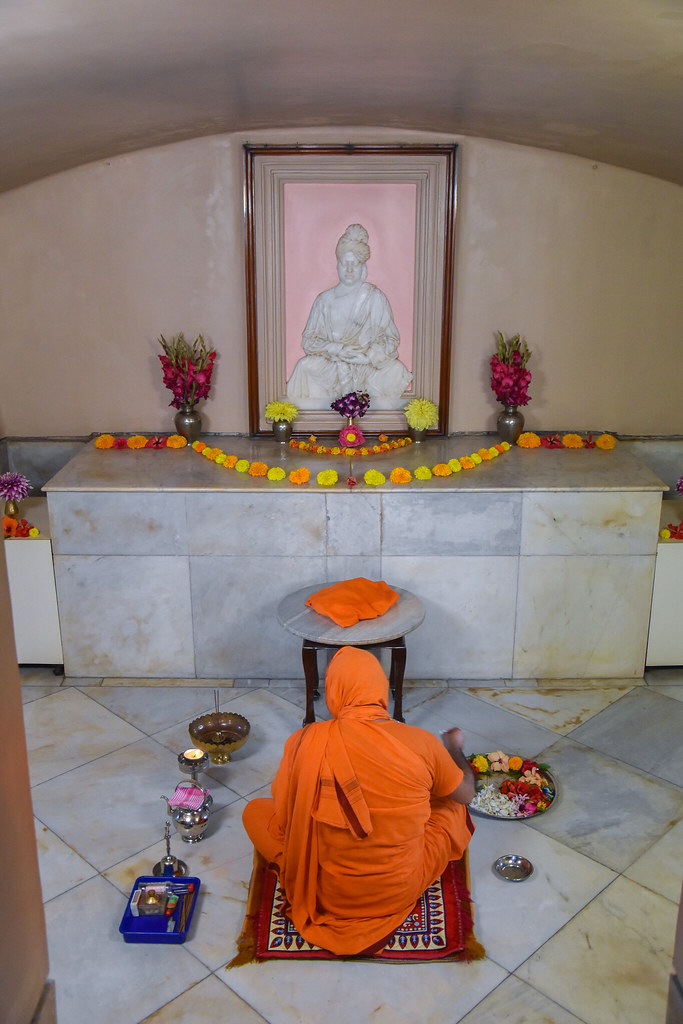 The marble relief of Swamiji installed inside the temple became possible by the efforts of Sister Nivedita, a disciple of Swamiji, and with financial contribution from Mrs Leggett, an associate of Swamiji. At first it was decided to install a smaller relief of Swamiji (than the present one). Mounting expenses did not permit anyone to conceive of a larger one. But when Mrs Leggett, the donor herself, suggested a larger marble relief, Nivedita’s joy knew no bounds. She wrote, ‘That size would be magnificent! It would make the Vivekananda temple look grander all the more and would remain an outstanding event for Ages to come!’

The marble relief was made in Jaipur. Sister Nivedita writes: ‘The sculptor had begun the work with a small puja and offering in front of the marble stone. Then he prayed intensely to Swamiji veiled in the stone: “Swamiji! Kindly manifest yourself in my hands!” He works right from 8.00 in the morning till 7.30 in the evening with a break only for his lunch. He sent me word if the work was not accomplished to the satisfaction of us, he would not accept a single rupee for the work; he would return all the money.’

This marble relief of Swamiji was installed in the temple in a simple way during 1913 and Swamiji began to be worshipped there. The construction work still prolonged and it could be completed only by the end of 1923.

Sankariprasad Basu writes: ‘In these long sixteen years many meetings were held in honour of Swami Vivekananda in different parts of the country, and thousands and thousands raised ‘‘jaya-dhvani’’ in his name. Thousands visited Belur Math and offered their devotional salutations to him at the unfinished temple. We cannot doubt the devotion of these people. However, it has to be borne in mind that our bhakti is intertwined with sluggishness because of which we fail to accomplish anything worthwhile.’ 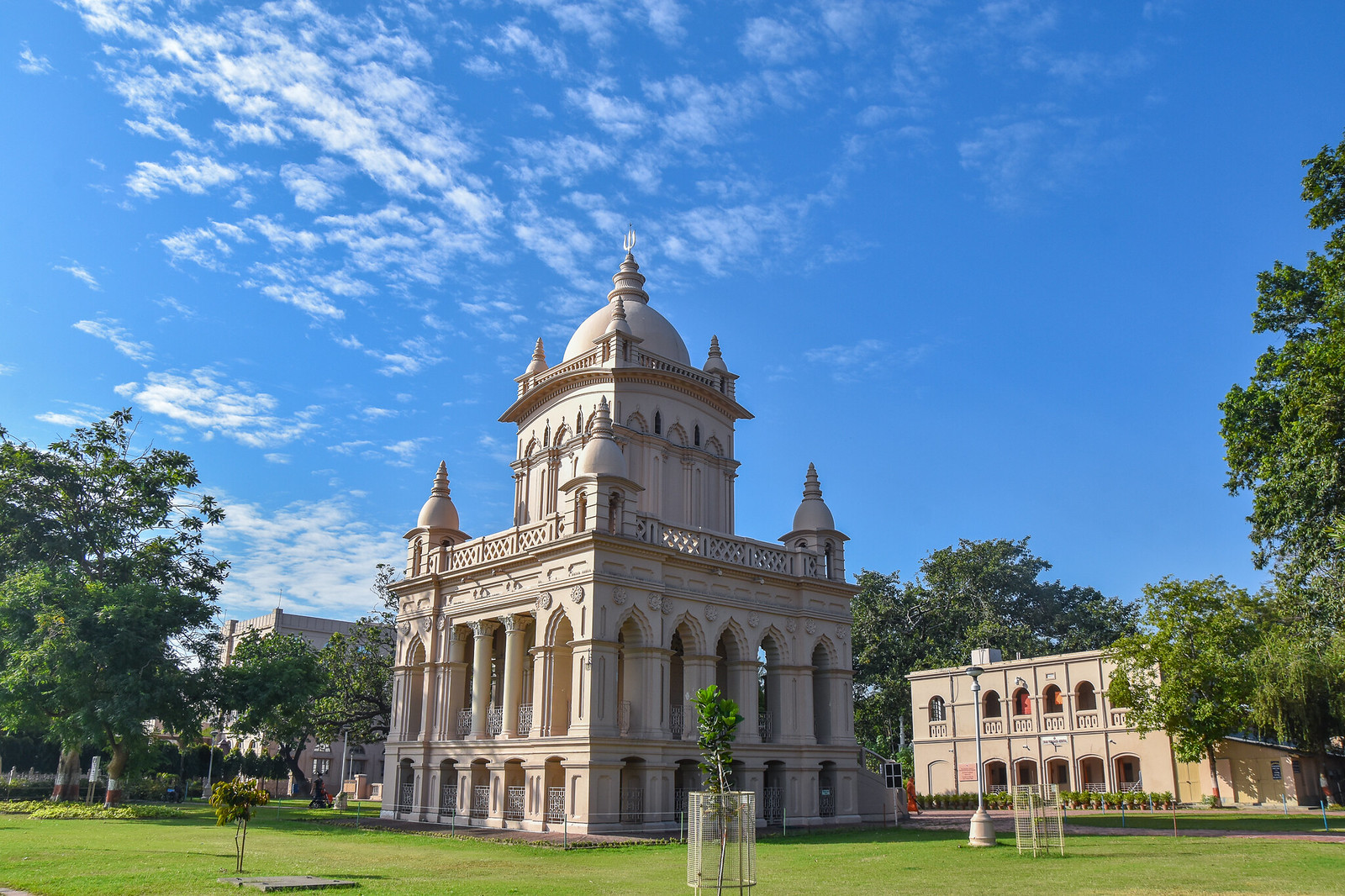 Swami Vijnanananda looked after the temple construction. Before the commencement of the work, he was seen immersed in the thoughts of Swamiji. He used to talk of Swamiji constantly and meditate upon him. He was then living at the Ramakrishna Math at Allahabad. Often he visited the nearby Bharadwaj Ashram and saw the images of the Saptarshis (Seven Sages) and intently observed them, for Sri Ramakrishna had seen Swamiji as one among the seven sages of the Saptarshimandala (plane of Seven Sages). He even had an oil painting of the Saptarshi-mandala made for display in his room. He repeatedly said, ‘Swamiji is all-pervading in the universe. However, his abode is the Saptarshi-mandala.’

Swamiji’s temple as well as the Om temple upstairs were declared open in January 1924.

However, many were not impressed by the flight of stairs leading to the Om temple. Known for her refined taste, Miss McLeod wrote that the steps were ‘steep, high and narrow and not at all fitting to Swamiji and his thinking’. She did not stop with mere criticism, but made efforts to better the stairs. She got a design from the Villa d’ Este in Italy, which was famous for its sweeping and curly stairs, and altered the stairs accordingly.

Sri Ramakrishna once referred to Swamiji as Shiva and himself as his Shakti. There are instances of some of his brother disciples having had the vision of Swamiji as Lord Shiva. We have seen the oval-crystal in Swamiji’s room, got made by Miss McLeod, in which Swamiji is conceived of as Lord Shiva. Symbolically, the apex of Swamiji’s temple is adorned with a nine foot trishula, a trident, which is a symbol of Lord Shiva. In 1939 Miss McLeod got the heads of the trident covered with gold.

Vilva Tree: There is a Vilva tree adjacent to the right-side stairs leading to the Om temple. On the same spot stood the original Vilva tree under which Swamiji used to sit.