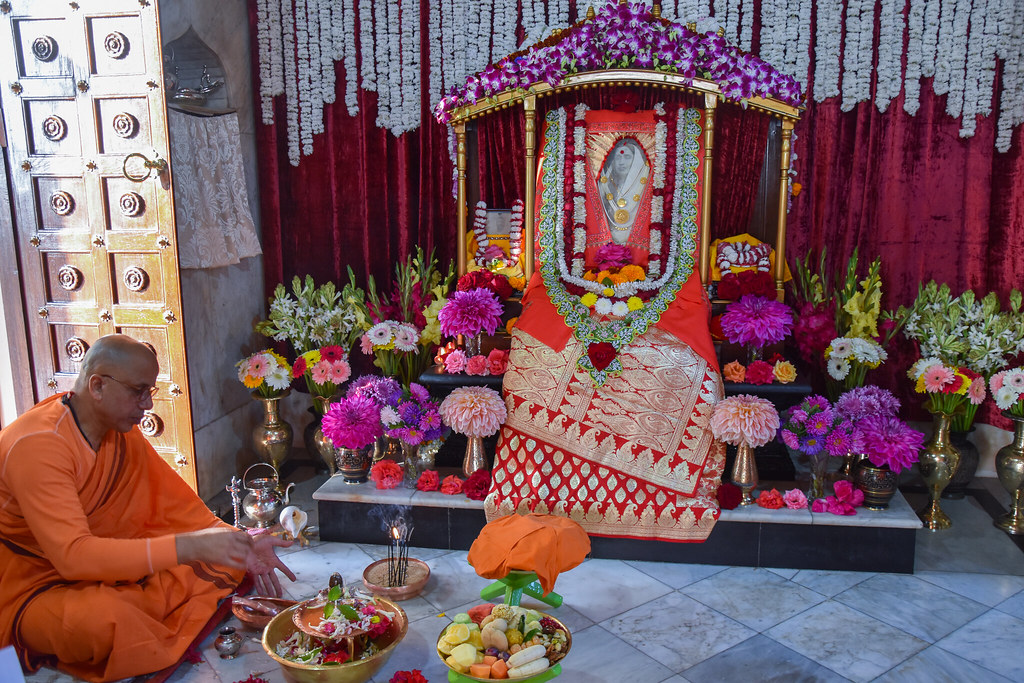 Next we come to Mother’s temple. Our gracious Mother is sitting in all her majesty on a beautiful altar, overlooking the Ganga, which she adored as divine. On her right is a small photo of Sri Ramakrishna, which was given to her by Gopaler-ma, a woman devotee of Sri Ramakrishna known for her spiritual attainments. On Mother’s left is a Baneshvara Shivalinga. Above the door is a niche with a stone figurine of goddess Durga.

According to Swamiji, Mother was born to revitalize power in this world. He said: ‘You have not yet understood the wonderful significance of Mother’s life—none of you. But gradually you will know. Without Shakti (Power) there is no regeneration for the world. Why is it that our country is the weakest and the most backward of all countries?—Because Shakti is held in dishonour there. Mother has been born to revive that wonderful Shakti in India; and making her the nucleus, once more will Gargis and Maitreyis be born into the world. Dear brother, you understand little now, but by degrees you will come to know it all.’ Mother’s temple stands on the spot where her mortal remains were consigned to flames. Hence the place is a Shakti Pitha, an Abode of the Divine Mother.

After the passing away of the Mother, many places were suggested to arrange the pyre. Swami Shivananda selected the present spot and said, ‘Mother will sit facing the Ganga and will ever shower eternal peace on the whole of humanity.’ Swami Turiyananda, a disciple of Sri Ramakrishna, also felt that the temple would look majestic if it faced the Ganga. The temple was erected accordingly; of all the temples in Belur Math, Mother’s alone faces the Ganga.

Mahendranath Gupta (M.), the recorder of The Gospel of Sri Ramakrishna, records something unique. When he was unable to overcome the grief of Mother’s passing away, he had a vivid dream, which he describes in his own words: ‘The other day Mother appeared to me in a dream. She said, “What you saw as my passing away was just an illusion. Here, behold! I am still in the very same form!’” Swami Shivananda once remarked: ‘Mother is the Divine Mother Herself, and She lives here eternally.’

Foundation stone for this temple was laid on 31 December 1920, Mother’s birthday in the year she passed away. Due to the relentless efforts of Swami Saradananda, who remained always close to Mother’s heart, the temple was completed the very next year. He dedicated the temple on 21 December 1921, the sixty-eighth birthday of Mother.